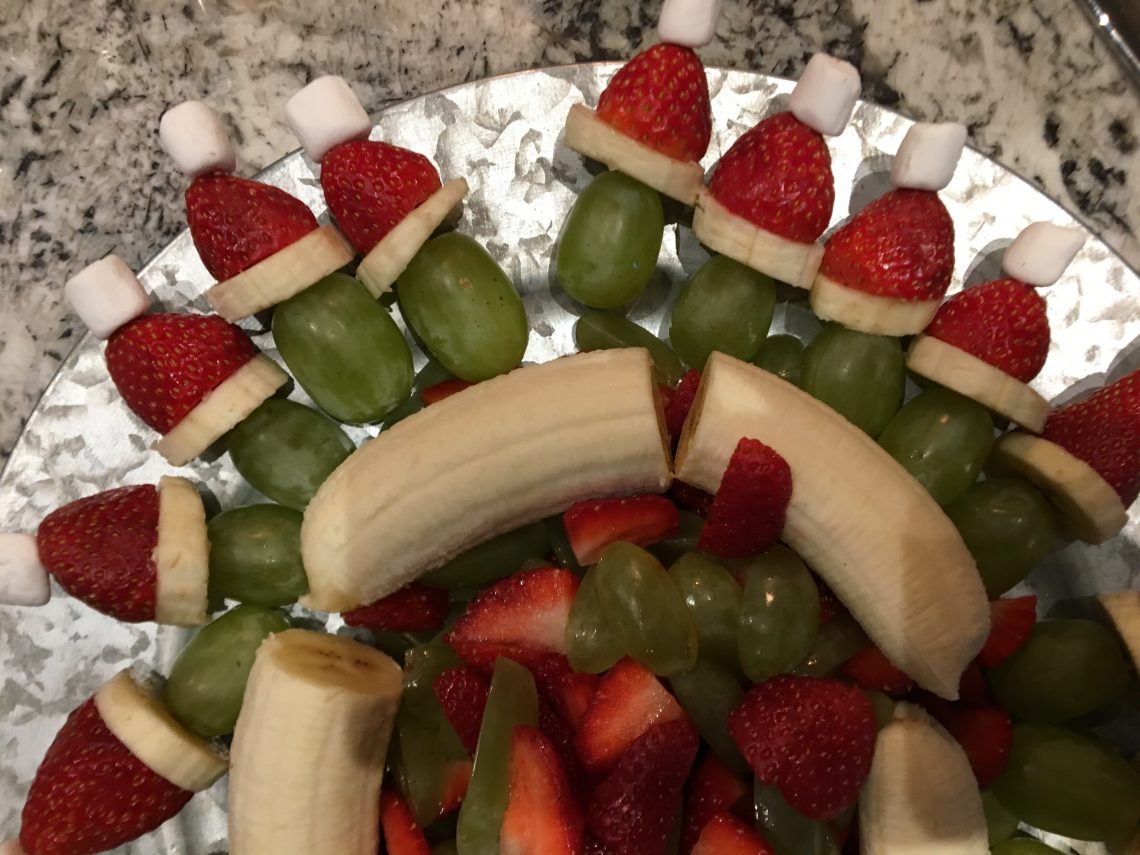 Each of my Christmas parties to date has been in a theme that I picked because it appealed to me (such as last year’s Flapjacks and Flannel Christmas Party).  Now that my son is getting older and understanding more about Christmas, though, I wanted the theme for this year’s Christmas party to be something he might enjoy as well.  We had let him watch the movie “How The Grinch Stole Christmas” earlier this month (not the newer renditions but the original one that I grew up watching every December of my childhood), and he talked about it for days afterwards, so I thought it might be a good theme option.  Overall, it seemed to go over pretty well with the little ones.  Plus, I had a blast channeling my inner 80’s child while decorating for our Merry Grinch-Mas Party!😋 Here are a few pictures:

Desserts and sweet treats were set out on a low-rise bookshelf that I had wrapped in brown kraft paper and drawn a fireplace and mantle on.  Simple hand-made Grinchy stockings were created using felt, white stuffing and pom poms, and hung to look as though they were hanging from the makeshift fireplace mantle.  The background was made up of a couple pieces of festive wrapping paper I picked up at Michaels and taped up, then completed with a garland border and some hanging Christmas balls.

I wish I could say the fireplace decoration was creative genius at its best, but this was actually all done for practicality purposes: that low-rise bookshelf is completely full of arts and crafts materials, such as paint, glitter, seven million pipe cleaners, hundreds of tiny painting sponges and brushes, and so on.  I really didn’t feel like have multiple tiny hands pulling those items out and spreading them all over the room on the day of the party, so rather than moving everything, I simply covered it up!  It worked perfectly – not a single thing was moved.  In fact, it worked so well I considered leaving it up indefinitely after the party was over.😋 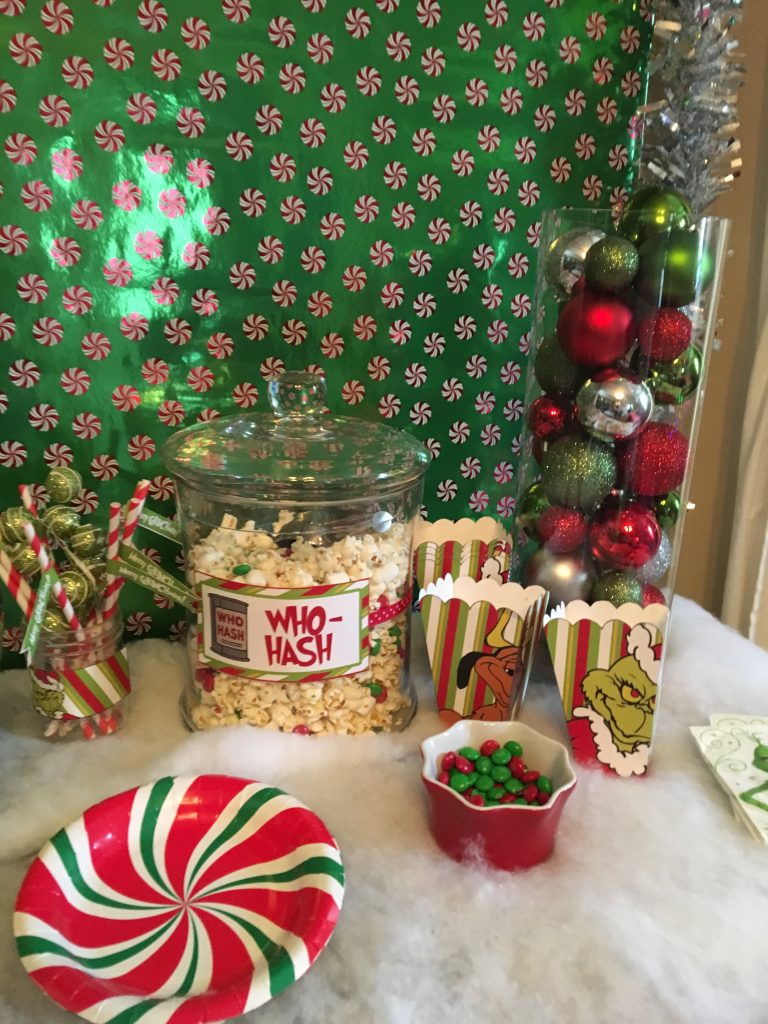 “Who Hash” (popcorn mixed with red and green M&M’s and mini marshmallows) was put out as a snack, along with some themed popcorn boxes.  All paper products were purchased from chica and jo, then printed and DIY assembled. 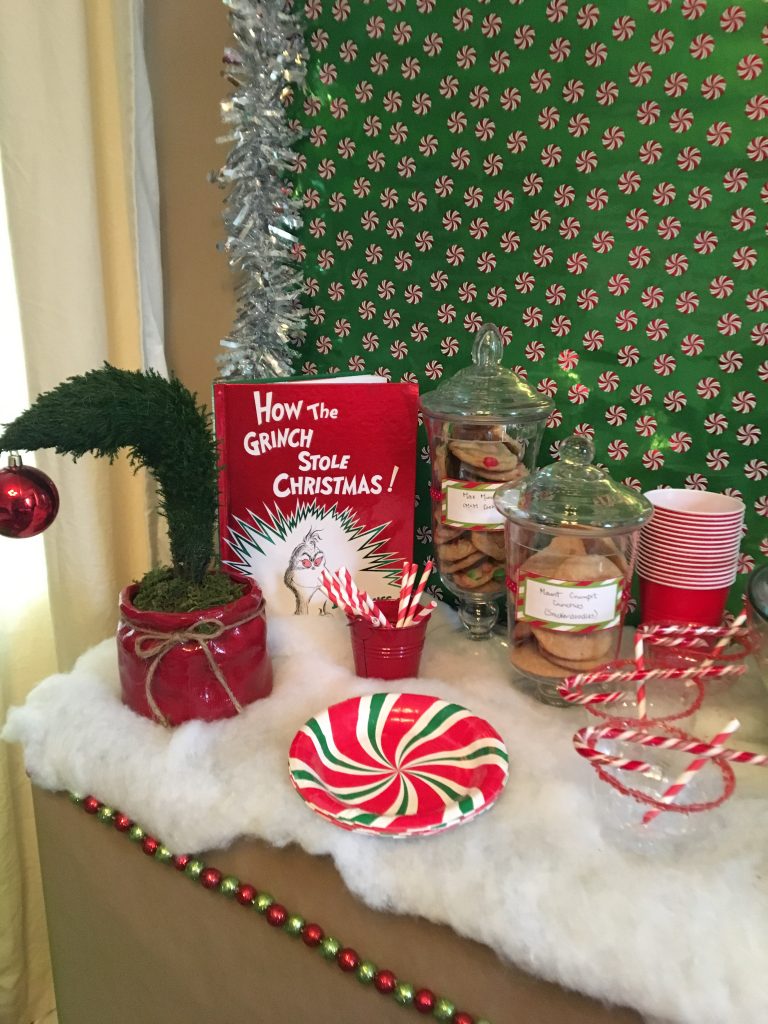 Mount Crumpit Crunchies and Max Munchies (both cookies) were also set out as a snack, along with our copy of How the Grinch Stole Christmas and an incredibly adorable Grinch tree. 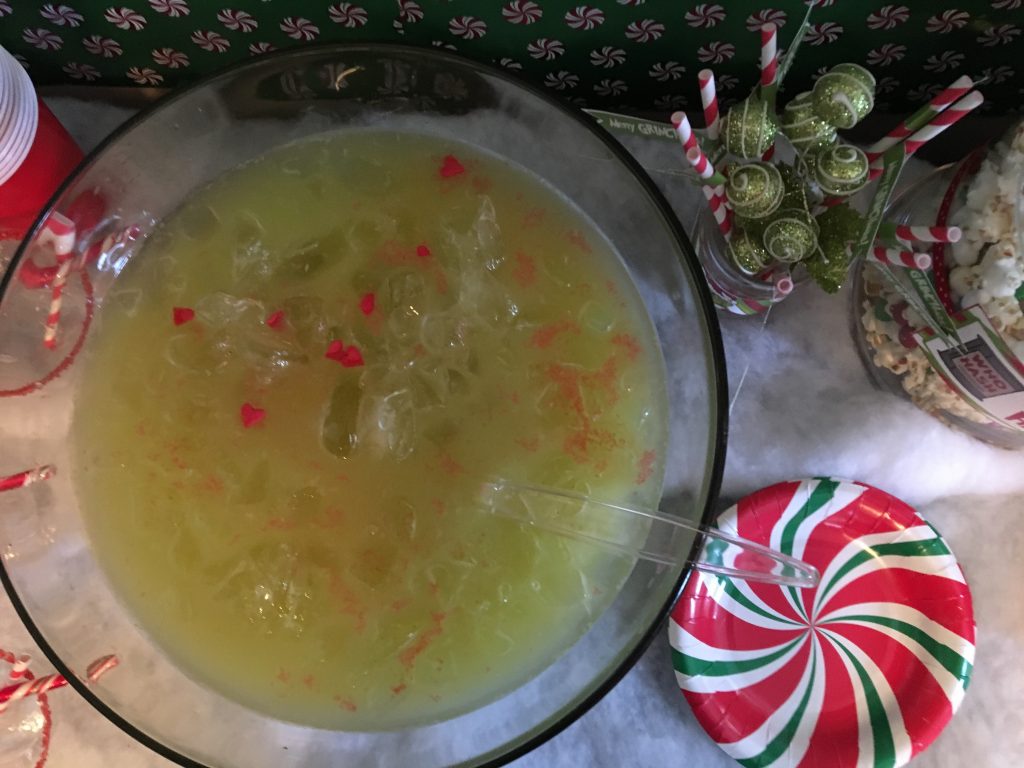 Grinch Punch was put out (recipe can be found here), which I sprinkled some red sugar and red heart candies in, along with red sugar rimmed punch glasses and red and white straws with “Merry Grinch-Mas” flags. 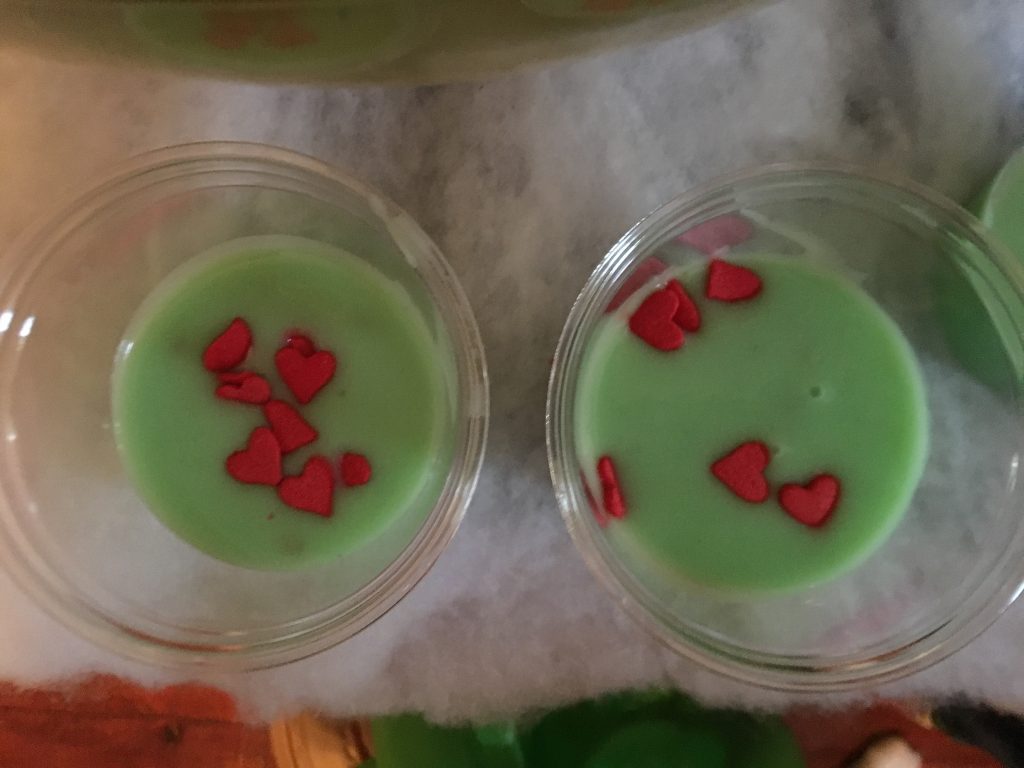 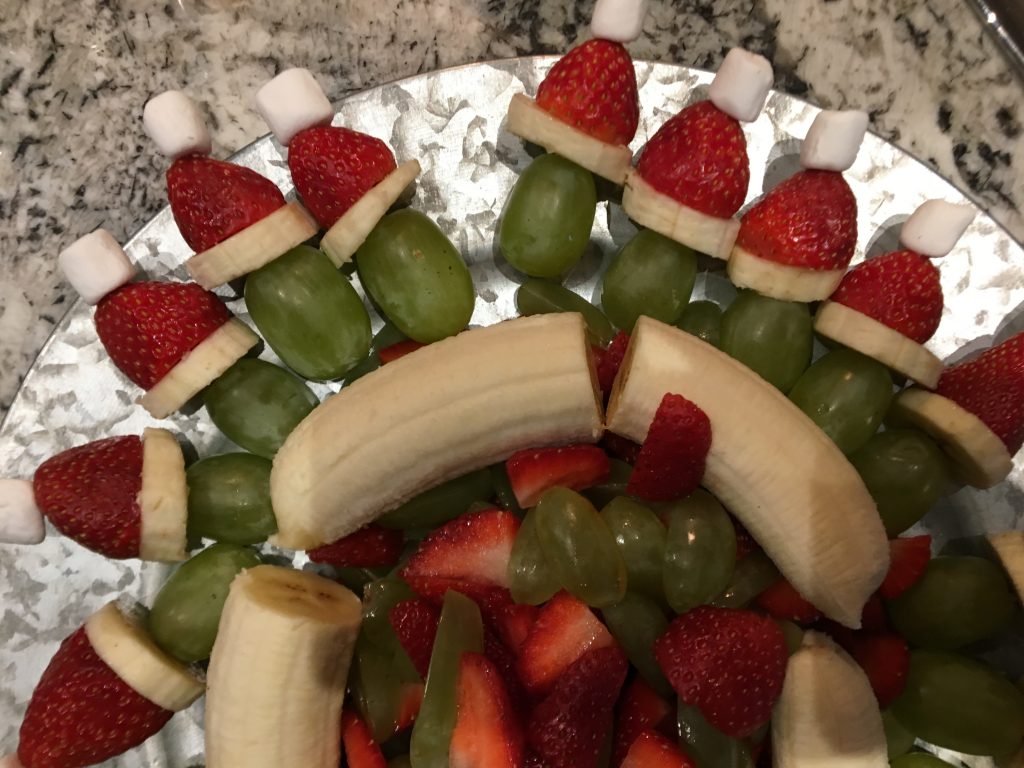 Miniature Grinches were made using green grapes, banana slices, strawberries and marshmallows and served as a snack.  These things went fast, and I mean really fast!  They were healthy, adorable and tasty, all wins in my books!

Unfortunately, I forgot to get pictures of the rest of the food options, which included some themed items, such as “Roast Beast” (which were red tomato pinwheel wraps stuffed with beef, cheese, lettuce and a cream cheese and three cheese ranch dressing mixture) and “A Crumb Too Small for a Mouse” (a spinach pastry pull-apart bread in the shape of a Christmas tree that was made by a friend of mine).  Miniature WH2O bottles were put out for little ones (I cannot recommend enough using miniature water bottles in lieu of the larger ones at kids parties because it really does cut down on wasted water!). 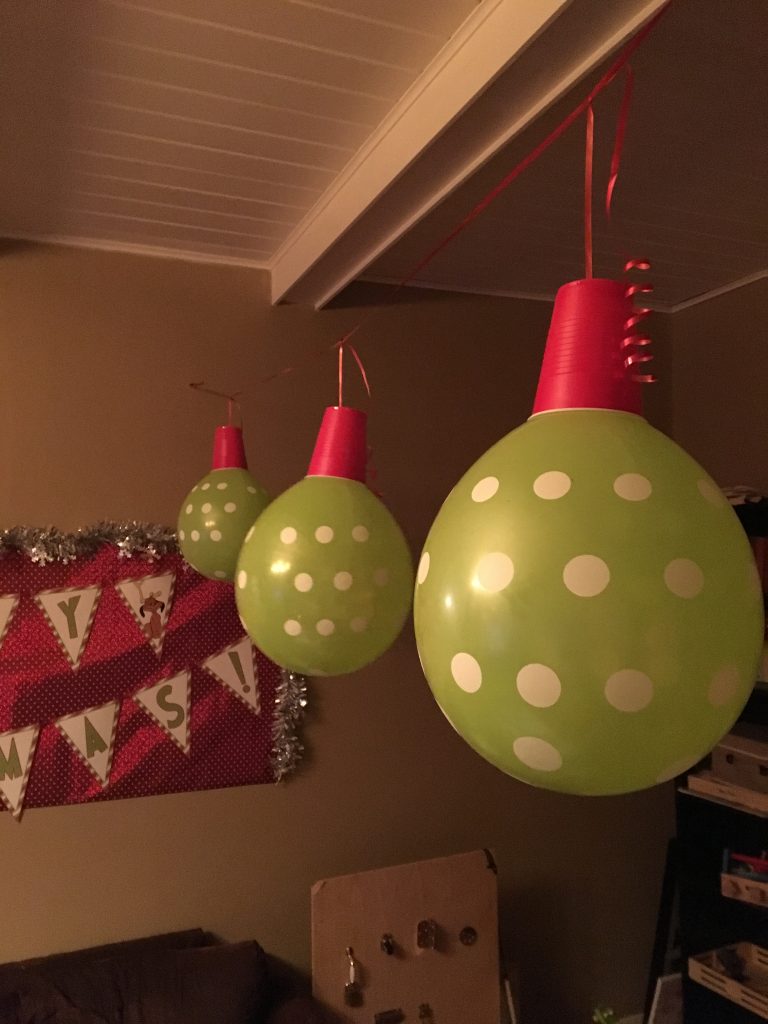 Red solo cups were strung up on top of green themed balloons and hung from ribbons around the room to look like strings of large Christmas lights.  This was one of the simplest decorations I have ever made, yet added so much personality! 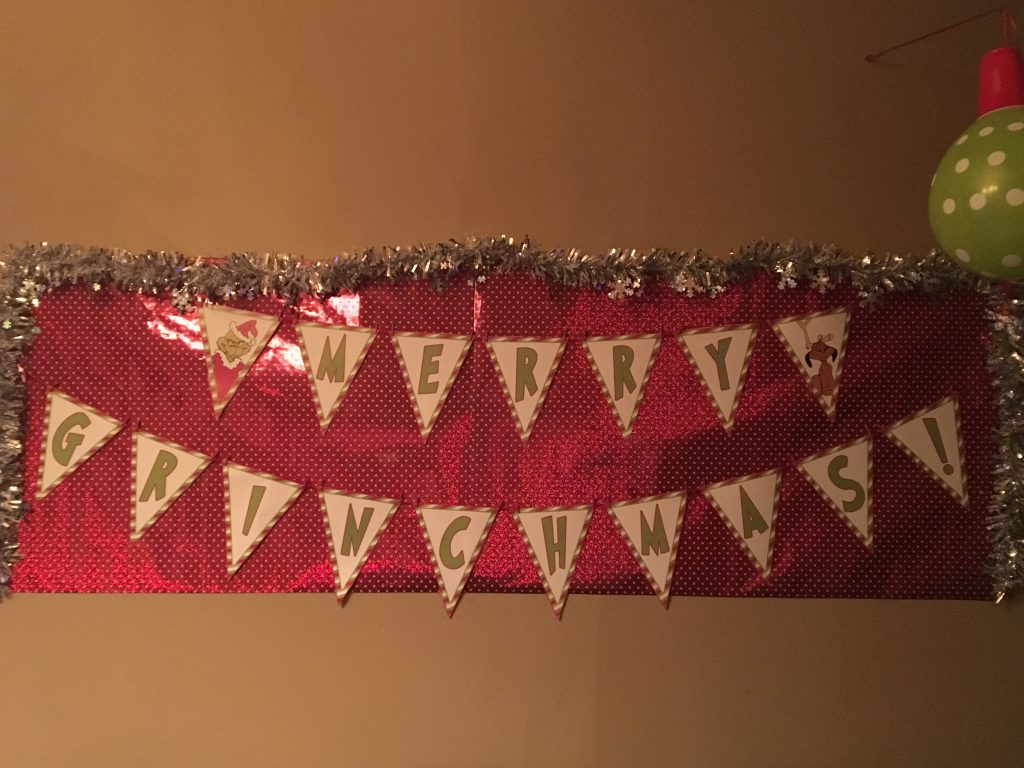 It just wouldn’t be a party without a pennant banner! 😋 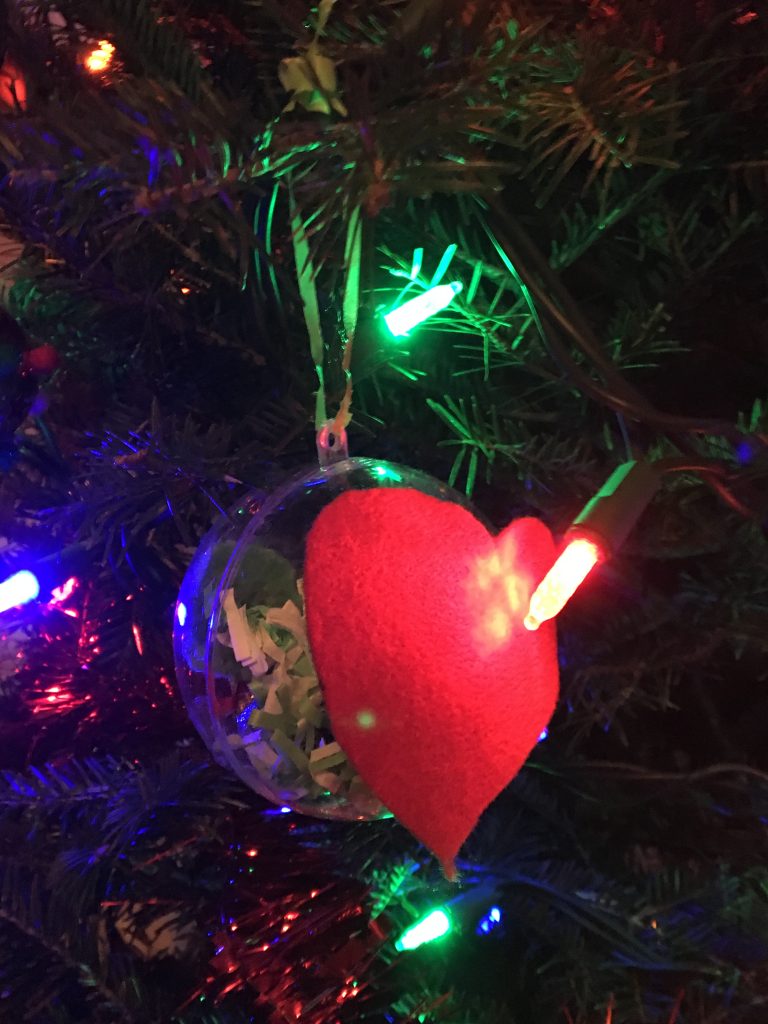 To keep the little ones occupied, I picked up plastic Christmas balls from Dollarama that could be opened and stuffed with Grinch themed decorations.  Red felt hearts  were either added to the inside with the other decorations or glued on the outside.  Pictured above is my son’s final product!

I definitely had a lot of fun planning and throwing this Grinch themed party.  I couldn’t have pulled it off without the help of my dear friend, Sarah, who came by the day of the party and helped with food and craft prep, setting up and tolerating my neurotic tendencies.  Huge thanks as well to my friend, Anastassija, who lessened my burden by bringing a some very yummy food for everyone.  And, of course, special thanks to our very tolerant nanny, Shannon, who helped with a bunch of the cutting for the DIT decorations.  As each of these ladies knows, my work schedule was rather hectic (to say the least) leading up to the day of the party, and I couldn’t have pulled it off without their help!

If you have thrown your own Grinch-themed party, I would love to hear from you!  Please feel fee to leave some party details below! 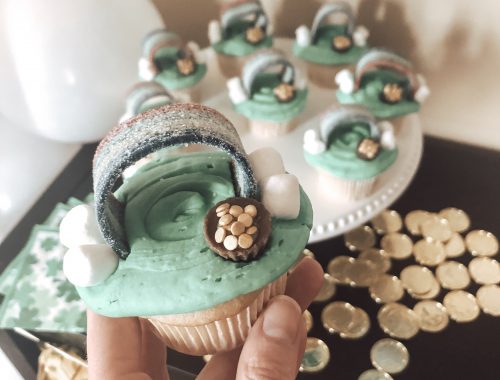 Over the Rainbow Cupcakes 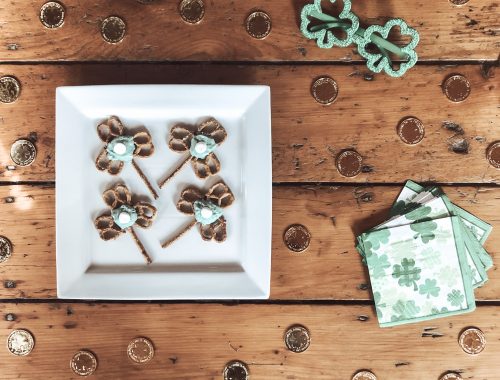 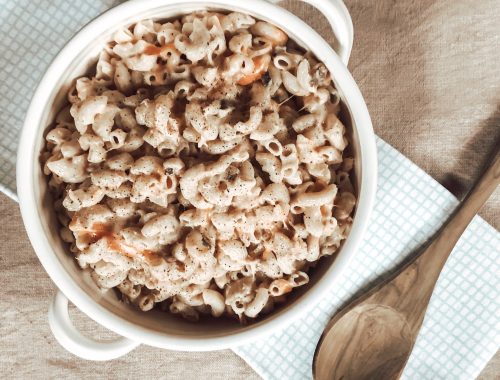